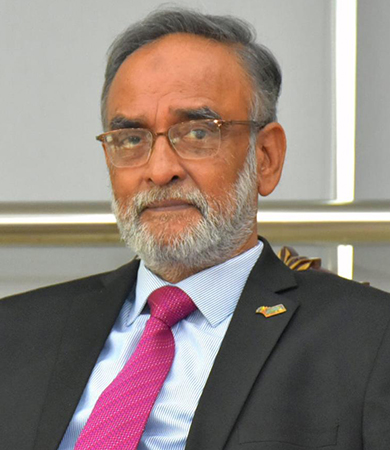 Comptroller and Auditor General of Bangladesh

Mohammad Muslim Chowdhury, 12th Comptroller and Auditor General of Bangladesh is a highly accomplished person with an illustrious career in the civil service spanning across 33 years.

Having an in-depth and broad-based knowledge and experience on matters of Public Financial Management, Administration and Governance, he was a member of Bangladesh Civil Service (Audit and Accounts Cadre) 1984 batch.

Prior to assuming the office of Comptroller and Auditor General of Bangladesh on 17th July, 2018, Mr. Chowdhury was Secretary, Finance Division, Ministry of Finance. Before his elevation to the position of Secretary to the Government, Finance Division, Ministry of Finance, he had served as Deputy Secretary, Joint Secretary and Additional Secretary in the same ministry. He had held various positions under the Office of the Comptroller and Auditor General, Controller General of Accounts and Controller General Defence Finance.

During his long and illustrious career in the civil service, Mr. Chowdhury had pioneered the Public Sector Financial Management Reform and was awarded the “Jana Prashashan (Public Administration) Award, 2017” for his contribution to the improvement of Public Service delivery system. He was passionate about introducing e-Governance

in Finance and engaged in a supervisory role at the IFMIS (iBAS++) development and implementation process. He was actively involved in the initial formulation and implementation of PPP Framework in Bangladesh and drafted the PPP Strategy and Policy issued by the Government of Bangladesh. He had steered the formulation of New Budget and Accounting Classification System (BACS) in the Government planning, budgeting and accounting from Fiscal Year 2018-19.

As a Consultant, Mr. Chowdhury worked in the PFM reform area with World Bank and DFID funded projects. In the past, he worked as Director on the Board of Directors of Bangladesh Krishi Bank, Sonali Bank Ltd. (also was acting Chairman), Bangladesh Biman, Titas Gas Transmission and Distribution Company Ltd., Eastern Refinery Ltd. and Dhaka BRT Company Ltd. He was also a Council Member of ICMAB and National Heart Foundation. He was the first MD and CEO of the Government-owned largest Infrastructure Financing Company, BIFFL. He worked as Director to the Board of Directors of SAARC Development Fund (SDF), Headquartered in Bhutan.

Mr. Chowdhury was born in a respected noble Muslim family of Chittagong. In his personal life, he is married. His wife Mrs. Sabina Haque is a teacher by profession. They are blessed with two daughters.